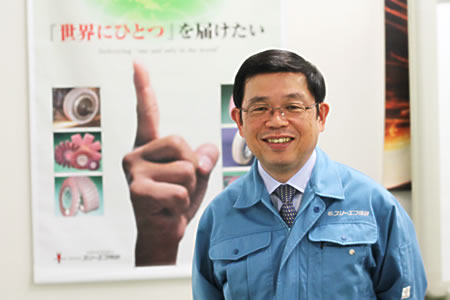 Our wish is to supply our customers with products are “One and Only in the world.”
By supplying abrasive wheels, our company helps our customers achieve high quality manufacturing and cost reduction.

Since the Stone Age, humans have used processes such as shaving and polishing to sharpen axes and spears for use as weapons and in cooking. Even today, after a wide variety of metals are refined, they are polished many times in the process of making them into various objects. This starts with polishing immediately after the metal refining for descaling, for thickness reduction and to remove surface defects, and everything up to hairline or mirror finishing. Polishing work is not something that the consumers see directly, but it is performed in all aspects of metalworking.

Our company was founded in 1971 as a specialized manufacturer of abrasive wheels. Ever since then, we have concentrated on the development of products based on our own polishing theory. Recently, we have become a manufacturer specializing in large sized industrial abrasive wheels for use on polishing machines and receive many inquiries from both Japan and abroad. We also started production in Thailand from 2007 and supply high-quality, low-cost abrasive wheels, mainly in Southeast Asia. From 2021, we will start EC sales of GEF wheels, so we urge you to take this opportunity to try them.

History of our Company

Our company is a manufacturer of abrasive cloth wheels in Kadoma Japan. When my father founded this company in 1971, he was making small abrasive wheels to be fitted on hand tools. His home and factory had two desks only and a charcoal brazier placed in a hole dug in the dirt floor. He placed a steel plate on the brazier and used to dry up small products.

Even though I was still child, I helped him by assembling small flaps of abrasive cloth. However, it was difficult to differentiate the company from others with the small abrasive wheels and the price competition was fierce, so business performance did not improve at all. My father became so tired that he got his finger caught in the machinery while working and lost it. I can still remember when I came home from school and nobody in the house, but there was a lot of blood and my father's finger lying at the rear entrance to the house.

And then, I gave up going to college after seeing my parents talking about cash flow every night.


Eventually, my father thought that the only way the company could survive would be to make something that other companies could not make. He embarked on the development of large polishing wheels to be attached to the automatic polishing machines of major companies such as steelmakers and railway rolling stock manufacturers. My father was fortunate in that the factory manager of a major steel manufacturer let him use a polishing machine during the night, when the production line was stopped, and my father repeated tests throughout the night each night. After much trial and error, he finally succeeded in the development of a higher cutting powered abrasive wheel. This was revolutionary, as it meant that an abrasive cloth wheel could be used in processes where there was previously no choice but to use a grinding wheel. The products from our company were safe, longer life and had low grinding noise, and they received surprisingly high praise. The exports of seamless pipes were at their peak at that time and all of the domestic manufacturers adopted the products from our company for the polishing of those pipes. Ever since then, our company has continued to accumulate unrivaled experience and achievements as a manufacturer of large abrasive wheels.

GEF wheels are a representative product of our company. This product was developed by dramatically improving the polishing ability of abrasive wheels, which were previously used only for smoothing and/or light polishing. Our products made it possible to use a polishing wheel in a rough grinding process, which could previously only be achieved with a grinding wheel.

My father wrote in his memoirs that he came up with the idea one summer day when he was opening and closing a hand fan. The placement of paper between the ribs that radiate out increases the surface area and means that the upper half of this hand fan is stiff. He thought that if he could make a wheel like this fan, then it would be possible to make the outside of the wheel hard like a grinding wheel, even if it was made of abrasive cloth, so this would improve the polishing ability.

However, my father was not able to fully commercialize this idea by himself, and his idea was left neglected for ten years. Later on, when I began to help with the business as his eldest son, I was using CAD to adapt some of the old model drawings. By chance, I was able to create a model that commercialized my father's idea. That was in 1989.

The high density of GEF wheels means that they tend to accumulate heat, so in principle they are only used for wet applications. However, we have recently developed an air-cooled type that has proven results in use in dry applications.

Abrasives are essential in the processing of metals. There is no product equivalent to our GEF wheels and they truly are products that are "One and Only in the world."